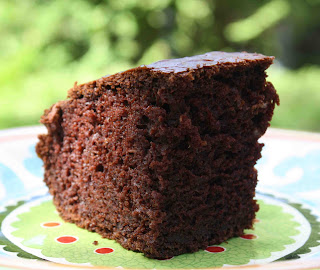 What do you do with those big cucumbers in your garden that go to seed? I usually throw them on my compost pile. Today I was about to pitch a bunch of overripe cuc's when I had an idea- why not use them the same way I use grated zucchini in baking recipes?  They really aren't that much different. I went online and actually found a variety of recipes for "Cucumber Cake". So- my idea of using grated cucumber wasn't that far-fetched after all. After searching through some of the recipes, I decided to adapt my old recipe for zucchini chocolate cake, substituting cucumber for zucchini. To give it a bit more zing, I added Vietnamese cinnamon- the best cinnamon in the world. Really- if you don't have Vietnamese cinnamon, then go on line and order it from Penzey's Spices. You will never buy cinnamon in the supermarket again! This cake was super moist and you would never know there were cucumbers in it! I think next time I might add a Nutella or cream cheese frosting.

1. Mix all dry ingredients together in a large mixing bowl.
2. Add eggs, oil, and yogurt and mix thoroughly with beater or by hand. Batter will be somewhat stiff.
3. Add cucumber and any optional nuts or raisins. Stir thoroughly to mix.
4. Spread in a 9 by 13 greased baking pan. Bake at 350 for about one hour or when knife inserted into cake comes out clean.
5. Cool and cut into squares- Enjoy!

My Old Crockery Mixing Bowls Above the Sink

Lobster on the Door to Kitchen 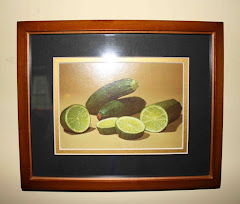 My Chinese Tea Set, a gift from CASCI when I was in China 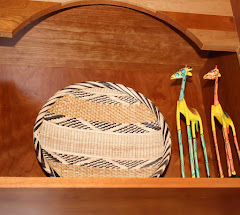 Favorite Restaurants I Have Been to

Favorite Specialty Food Stores I Have Shopped At: